I am glad that I was able to contribute 1 tree for my run in the Natures Valley Run. This is one of the races which supports a good advocacy and I hope that all the trees are planted as promised. There were about 8,400 runners who officially participated and finished the run based on the race results. Everytime you go to a run rio organized race there are improvements seen. Few observations;
1. Wide screens in place.
2. Long hydration tables and it didn't run out of stock. Good replenishment method I must say.
3. Km markers are very visible, it helps in motivating yourself as you see the remaining distance.
4. Medals are immediately awarded to you as you cross the finish line. This is better rather than qeueing at the back to get the medals.
5. Ice cream at the finish line!
I must say that this is one of the good races I joined and glad that I was a part of it. Great Job to Rio and the rest of the organizers and staff.
During the race, I was thinking of giving my all in the first few km of the run to gauge whether I can keep up with the target pace in my mind which was to maintain a 5:40 pace for the 1st 10km and will manage the next half of the run from there. As much as I wanted to believe that it is possible, it was not. Reality tells me that this will just be an easy run considering that I did a 90km ride the day before. But I was all positive at the start line and told Jay that will try as much as I can to keep up with the pace.
My optimism suddenly changed after km 2, my legs suddenly felt weird and heavy as if I had finished a 15km run already. I was slowing down from a 5:30 pace down to 6:00, then 6:30, then 7:00 and even had 1km with an 8:45 pace. Honestly, I was seriously thinking of quitting this race (for the 1st time). I have been always an optimist but this time I was really planning to quit. As I cross the turnaround for the 10k runners, I wanted to take off my bib and call it a day. But then again, as I see familiar faces in the race, I just kept on going because I dont want them to see me quitting. This was a very difficult run for me and was taking 1km at a time until I reached the finish line. I set a target time which was 2:25 at least, but ended up finishing at 2:30:06 as I had to stop once in a while to stretch as I was getting cramps already. Good thing I didnt quit because I will surely regret that for a long time. No matter what happened, stay focused and never quit.. it is not an option!

But bottomline, always be prepared for a race.

It was a good day also because one of the GRC member, Vince (14 yrs old), have completed his first Half Marathon. We were all proud of him because he said he will, and he did finish it! Congratulations to Vince and his proud Dad - Val. Also, it was the first official 10k run for Allen Co who is a new member of GRC. I remember him telling me that he can't even complete a 3k run, but with his determination and discipline in preparing for this race, he have accomplished his goal. He will continue with his training and eventually complete his first half marathon in August. Let's wait and see on his progress.

Here are some photos courtesy of Ric Inion: 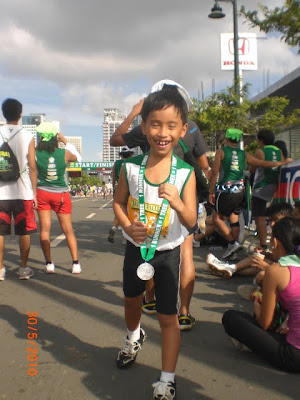 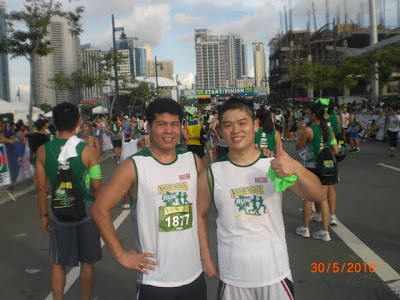 Ric and Allen, challenges each other for their 21k run in August. 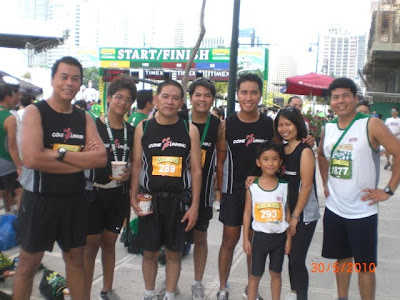 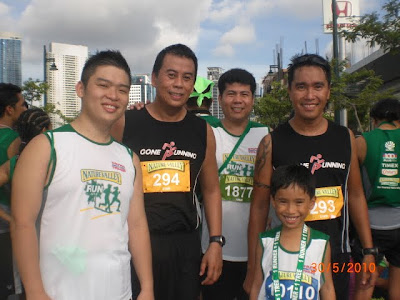 I am reposting this fun run for the benefit of Miko Habana. The run course is 500m, 3km, and 5km. Hope you have time to join and let's help give this young athlete another shot.

On May 16, 2010, numerous people from all walks of life will come together at the Ateneo High School grounds to support a young athlete named Julian Miguel “Miko” Habana.

One month ago, Miko Habana, a sixteen year old boy, suddenly collapsed due to cardiac arrest while warming up for a baseball practice at the Manila Polo Club. Although he was immediately resuscitated, he continues to require intensive medical and nursing care. He will also need comprehensive rehabilitation to assist in his full recovery.

Miko has been into baseball since he was 9 years old. He has played for the Ateneo High School and the International Little League Association of Manila (ILLAM) where he serves as captain for both teams. He has also represented the country in many regional and international tournaments including three World Series events as a member of the Philippine Junior and Senior Little League Teams.

It is heartwarming to note the extraordinary number of people who have been praying for Miko’s healing and for his family’s strength. We, his relatives and close friends, have organized a fundraising walk / run to help cover the cost of his medical and rehabilitation care.

In this light, we would like to invite you to join us, his family and friends, co-athletes, classmates and teachers, to participate in this event.

Below are two ways by which you can register:

a. Fill out the form online by clicking on this link.

b. Attached is the registration form which could be printed out and submitted with your donation on the day of the event for on-site registration.

Should you need more details, please feel free to email or contact us at any of the following numbers:

Many thanks for your prayers and we look forward to your support in this worthwhile event. We hope to see you all at the home plate!
Posted by Knight Runner at 10:51 PM No comments:

Training Under the Sun

Temperature rising! It was so hot since last week, I believe the temperature was ranging from 36-38 degrees. In my morning runs, I can already feel the heat at 6:30am. On weekends, I used to bike and run when the sun is up and it was manageable. But riding (40 km) last Saturday was so difficult as I can feel the heat pass through my bones. It was really exhausting and I have been hydrating too often. Worst, my route had an uphill climb to jamboree in UPLB. I have never sweat that much but I was dripping wet going up the hill. I was supposed to do a 10k run after, but managed to do 4.5km only as I cannot bear the heat and I started to feel dizzy (a sign of heat fatigue).

In this hot weather, some will opt to avoid the sun, while others continue their training regardless of the heat. For some they say it is a good way to test your ability on such weather so that come race day, you are used to the said environment especially if you are racing in marathon, triathlon, or even ultramarathon (speaking of which, I saw one lady ultramarathoner in LB on my way to my bike training at 12nn, I was doubting if I will continue my training but seeing her determined and focused, that got me motivated, I salute her for the effort).

However, we need to be safe also in training in hot weather. Here are some reminders for those biking or running under such condition:

1. Keep yourself hydrated – do not wait to be thirsty before hydrating, make sure you hydrate at least every 15 min. Use energy drink for those running or biking more than 30 minutes.

3. Wear light colored shirt – dark shirts (especially black) is absorbing the heat and will affect your performance as well. I saw one rider up to tagaytay last Sunday wearing all black. Hope he did well, but saw him struggling already.

5. If possible avoid training in hot weather – try to schedule runs early morning or at night. Do not risk your health, train smart.

Stay safe everyone!
Posted by Knight Runner at 9:43 PM 2 comments: 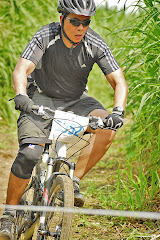